Olympics and The MET, Simone Biles enters the fashion world. 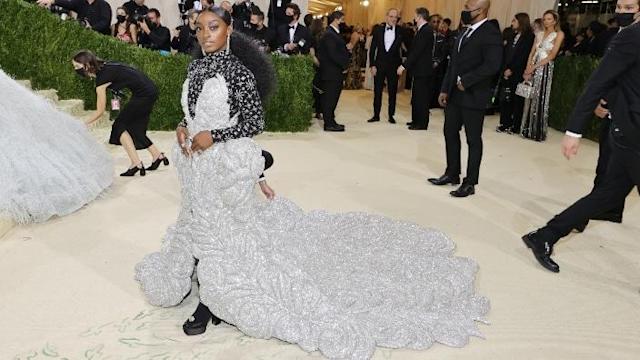 Houston girl turned greatest of all time gymnast Simone Biles made a beautiful entrance at the MET Gala Monday, September 13, 2021. Simone wore an 88-pound embroidered gown, the gown was so large that it was carried by 6 men up the steps of the MET.

Simone was a first-time guest this year along with her designers Athleta and Area who worked together to bring to life a three-piece set for Simone Biles to wear. According to Vouge.com these three groups, a gymnast, an athletic brand, and a glamour brand came together in the name of “performance”. This word came through in all aspects of design being influenced mainly by ShowGirls. Simone felt inspired by Josephine Baker, who was the first black woman to start in a major film in 1927. This connection of activism and standing up for what one believes in can be parallel to how Simone Biles has opened up when she withdrew from the Tokyo Olympics to make a note for her mental and physical health. Biles not only stood up then but also has come out in court testifying against Larry Nassar, USA Gymnastics Team doctor.

The Associated Press wrote stating that Biles stated that enforcement “turned a blind eye”, stating that “enough is enough”, her strength on and off the gymnastics floor goes to show the power this girl has to influence so many. Her appearance at the MET Gala goes to show so many young women that you can achieve so much by showing your strength to those around you. Simone is a perfect example of what beauty and fashion can do, they showcase people who can impact the world in a positive light and stand up for what is right. “I want to say to little girls in general, you can be tough in any sport you want to be, and you can be strong. On the other end, you can come out feeling empowered and beautiful and wear gowns like this and step out of your comfort zone,” Biles tells Vouge.