Quibi stars have no quibble with new phone-only filmmaking

The Future of Filmmaking 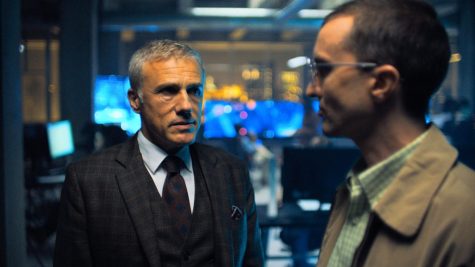 By MARK KENNEDY AP Entertainment Writer
NEW YORK (AP) — They were skeptical. The name was weird. The concept was a little crazy — but it was intriguing.
Oscar-winner Christoph Waltz and rising star Stephan James each overcame initial reluctance to become pioneers in Quibi, the mobile phone-only platform that offers installments of movies and TV in 10 minutes or less.
“When they told me about the whole endeavor, I said, ‘Really? Have attention spans come down that far? It’s now below 10 minutes?'” jokes Waltz.
Now on the other side, both film actors are firm believers in the process that transforms their art into something snack-sized. “It was kind of ingenious and I’m honestly glad I took the risk,” says James. “As the times change, we’ll change with it — and we should.”
Quibi launched last week with a staggering 175-plus programs planned for this year, including “Punk’d,” with Chance the Rapper and “Chrissy’s Court,” with Chrissy Teigen administering justice in small claims cases.
Two of the more prestigious scripted shows are Waltz’s “Most Dangerous Game” — co-starring Liam Hemsworth as a man who becomes hunters’ prey — and James’ “#FreeRayshawn,” the tense story of a man set up by police in New Orleans.
The actors say nothing on their Quibi film sets was different from being on a regular Hollywood one, with no dilution of quality or corners cut. “You wouldn’t have done anything different on a project that is shot for the theaters,” says Waltz.
Waltz’s show has 16 episodes and with each running about 10 minutes, the total entertainment time of “Most Dangerous Game” is what you’d find at any film at the cineplex. It’s just in chunks.
“It would be a movie if you string them together except for the fact that they employed additional nifty, crafty dramatic twists and turns to chain the individual portions together,” he says.
James was attracted to his Quibi show because it tackled race and policing in a very current way — telling the story of a black man framed by cops, with references to Black Lives Matter and a nod to the power of social media.
“Without question. I always believe that our power as artists is to make art that reflects life and society and to me the story of ‘#FreeRayshawn’ is no different,” he says.
Waltz, who has won Oscars for “Django Unchained” and “Inglourious Basterds,” says Quibi doesn’t need to be compared to other types of filmmaking.
“Just because it’s short doesn’t mean it’s of lesser quality or value,” he says. “It’s not the little cousin or the derivative or the smaller form of anything. It is Quibi. It is a thing in itself.”
Waltz also doesn’t believe Quibi’s launch points to the future of filmmaking or signals the death of traditional movies. Episodic films on phones are just going to be part of life from now on.
“Just because you have miniature portraits doesn’t mean anything for the future of landscape painting,” he says. “Just because you have a violin sonata doesn’t mean it will change the world of the symphony once and for all. No. These are things that exist at the same time.”
James sees Quibi as a refinement and technological evolution of something millions of people already do — watch TV and films on our phones, via apps or YouTube.
“To be honest, there are tons of people who, even before Quibi, were watching full-on shows on their phones, regardless of the platform. Now you have a platform that is literally made for your phone.”
The actor, who had a breakout 2018 with roles in Amazon Studio’s “Homecoming” and Barry Jenkins’ drama “If Beale Street Could Talk,” says Quibi’s offerings could conceivably be reviewed like other shows and movies and be up for Oscars or Emmys one day.
“It’s hard to think that something like this can’t conceivably be part of the future of Hollywood, that we can judge these things the same way we do other any piece of content,” he says. “There’s a lot of great, great work being put in on these shows so I don’t see why not.”
___
Mark Kennedy is at http://twitter.com/KennedyTwits