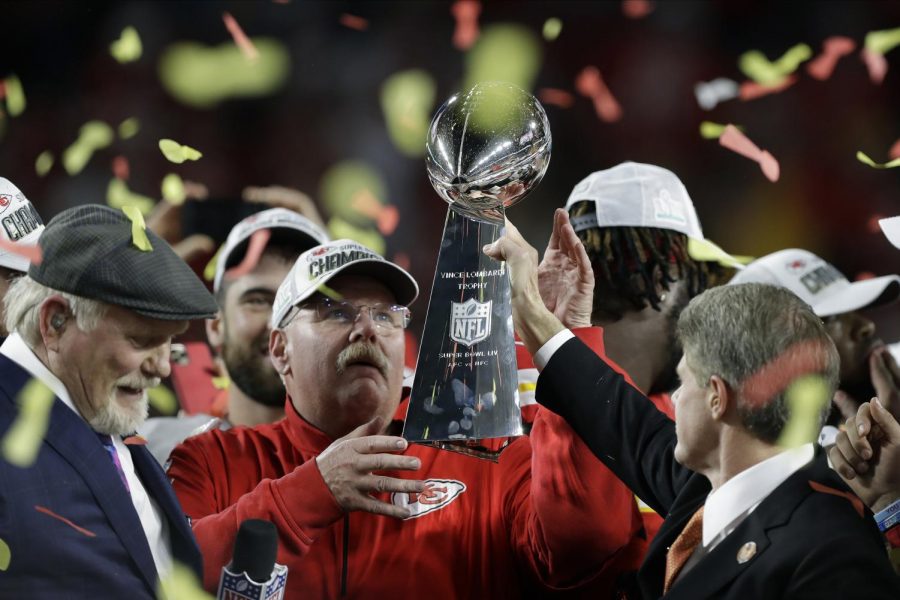 Andy Reid wins his first Super Bowl after 20+ years of coaching in the NFL.

50 years after winning Super Bowl IV, the Kansas City Chiefs won their second Super Bowl title in stunning fashion. Down 20-10 at the start of the fourth quarter, the Chiefs were able to score three unanswered touchdowns to win them the game. Along with the Super Bowl trophy, Chiefs QB Patrick Mahomes also received the Super Bowl MVP award. But as with every great game, there has to be an equally great (if not better) Super Bowl Half-Time Show performance. This year’s performers were Shakira and Jennifer Lopez along with guest stars Bad Bunny and J Balvin; and put on a show they did! Overall, this was a great game for the Chiefs. The San Francisco 49ers weren’t no pushover; the run game devised by Niners coach Kyle Shanahan was wearing down the Chiefs defense throughout the whole game. Their defense was also very stout; they had three forced fumbles, two interceptions and three sacks. Unfortunately, they couldn’t stop the Chiefs potent offense.

The Rockets Game before the Big Game

After a tough January, James Harden started the new month with a bang. He dropped 40 points along with 9 assists on the visiting New Orleans Pelicans. Russell Westbrook also chipped in with 22 points of his own. With that, the Rockets won the game 117-109 and now have themselves a three-game win streak. They are also a game back from moving up to the fourth seed in the West.