The Houston Texans lose to the Denver Broncos 24-38 on Battle Red Day. 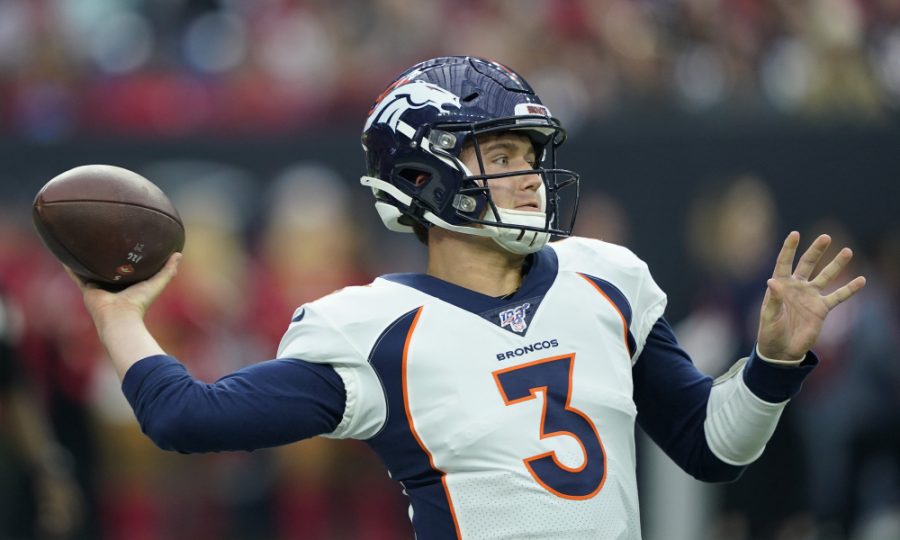 After winning an improbable game against the Patriots last Sunday, Houston laid an egg against the visiting Denver Broncos on the day they wear the red jerseys. The main thorn in Houston’s side was rookie QB Drew Lock; he threw for 300+ yards and 3 touchdowns. Thankfully, the Texans are still on top of the AFC South, but will have to face the second place Tennessee Titans twice in the last three games of the season.
1st Quarter (0-21)
Houston received the kickoff but as per the usual, they could not score any points on the opening drive. Denver however started their drive with a bang. Starting at their 8 yard line, Drew Lock faked a hand-off then lasered a pass to tight end Noah Fant who rumbled down the left sideline for 48 yards. Lock did it again, throwing a short pass to tight end Andrew Beck who ran for 29 yards. A few plays later, the Broncos found themselves with the first touchdown of the game thanks to Lock throwing a dart to Noah Fant at full stride. Denver kicker Brandon McManus made the extra point attempt, starting Denver off at 7-0. Down by score, Watson and Co. marched down the field making it to Denver’s 37 yard line. Deshaun Watson passed to wide receiver Keke Coutee who almost passed the first down marker. Only thing was he fumbled the ball away (it was recovered by one of the Broncos D-linemen who then handed it off to safety Kareem Jackson[he played  for the Texans last season]). Jackson then proceeded to run it in for a 70 yard TD. Kicker McManus again made the PAT, digging the Texans into a deeper hole early. Houston couldn’t strike back, giving Denver another chance to score. On the third play of the Bronco’s drive, Drew Lock threw a deep pass to WR Tim Patrick for 37 yards. Two plays later, Lock threw a check-down to running back Devontae Booker for 25 yards. Their drive was finished with a Drew Lock TD pass to TE Jeff Heuerman. The Bronco’s kicker again made the PAT attempt look easy, ending the first quarter of play 21-0.
2nd Quarter (3-31)
Houston were able to put points on the board once play resumed in the second quarter. Those points came for the leg of Houston kicker Ka’imi Fairbairn; the field goal was made from 54 yards out. Houston’s defense were also able to stop Drew Lock and Co. from scoring a touchdown; Denver instead had to go for a field goal. Thanks to the defense holding the Broncos to a field goal, now was the time to make a comeback. Unfortunately, the Texans were unable to do so and turned the ball over on downs. The field position was perfect for Denver; Lock scored his third TD of the day with a short dump off pass to running back Royce Freeman. The PAT attempt was kicked fair and Houston found themselves down 30 points. Once the officials blew their whistles for half time, Houston looked down but ready to fight back come the second half.

3rd Quarter (17-38)
Denver received the kickoff after the break, and went on chugging like a train down the tracks. Lock found Fant again for a pass that went for the first down and 23 yards. A few plays later, Lock handed the ball off to running back (and Denver native) Phillip Lindsay for the six points. McManus made another PAT attempt, putting the Houston Texans flat on their backs. This must have incensed Deshaun Watson because he became a man on a mission following the kickoff. On the second play of the drive he threw a 20 yard pass to Coutee (who didn’t fumble) that went for the first down. A few seconds later, while scrambling about after the pocket collapsed, Watson found DeAndre Hopkins wide open and fired a deep 43 yard pass that went for the touchdown. Fairbarin mad the extra point attempt and the Texans found themselves with their first touchdown of the game. Things looked even better when recent acquisition Tashaun Gipson picked off Drew Lock right at the TD line. He was able to return it for 29 yards. With the pick, Houston came back onto the field with a vengeance. The first played showcased Watson’s threat as a runner as he picked up the first down along with six extra. He again showed his speed a few plays later by running into the end zone for the score. Fairbairn again made the PAT attempt, leaving the Texans with a better taste in their mouths at the end of the quarter.
4th Quarter (24-38)
Denver uncharacteristically committed a four and out to start the fourth. Things seemed to be aligning for Houston. That all went down the drain when a ball meant for Jordan Akins was tipped then picked off by Kareem Jackson. This sent the whole crowd in tears. Thankfully, Houston’s defense again forced Denver to punt the ball, giving Houston another chance to score. The eventually did score another crucial touchdown thanks to Deshaun Watson turning on the speed for his second rushing TD of the day. Faribairn again made another extra point attempt look easy putting the Texans only two scores back. Houston elected to have an onside kick, which they successfully recovered. However, Watson threw a terrible interception right afterward, ceding the game to the Denver Broncos. This should have been a win-able game for Houston, but they must have lost focus after taking down the Patriots. Now they have to beat a surging Tennessee Titans team on the road to keep their spot on the division lead next Sunday.
Highlights en Espanol

Courtland Sutton has become the 4th Broncos player in the Super Bowl era with 100+ receptions in his first 29 career games.

Drew Lock is the first Broncos QB with 245+ passing yards in a game since Joe Flacco back in Week 4.