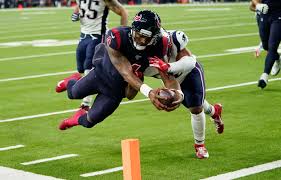 Deshaun rushes into the endzone against the Pats.

The Houston Texans defeat the New England Patriots 28-22 at NRG Stadium. This was Coach Bill O’Brien’ s first win against his former team in five games. With the win, the Texans move to 8-4 on the year and the Ravens become the new #1 seed in the AFC.
1st Quarter (7-3)
The Texans received the opening kickoff but could not score any points on the ensuing drive. With that, the Pats moved down the field but were held to a field goal, putting the first points on the board for New England. Again the Texans struggled with the ball int their hands, punting the ball back to New England. With New England in possession again, the Houston fans in attendance looked to be in for a long night. Thank you to Texans corner back Bradley Roby, who picked off New England quarterback Tom Brady. Roby did not score and he was flagged for taking off his helmet in celebration of picking off Brady, but it didn’t matter. The pick light up the joint. With the field position, Deshaun Watson passed to running back Duke Johnson for the first touchdown of the game. The PAT was kicked fair, giving the Texans the lead for the night. Houston’s defense also forced the Patriots to punt on the drive following the touchdown.
2nd Quarter (14-3)
Following the punt, Watson and Co. marched down the field eating up time and culminating the drive with another touchdown. Watson again threw for another touchdown, this time to tight end Darren Fells for the six points. The point after was again kicked well, stretching Houston’s lead to 14-3. After that, both teams’ defenses stopped any action before the halftime whistle blew.

3rd Quarter (28-9)
Defense again showed out for both teams once play resumed from the break. Houston again stopped Tom Brady and the Pats offense from scoring, with this drive ending in a turnover on downs. With the TOD, the Texans were in prime position to score again. At midfield, Deshaun Watson threw a nice pass to Kenny Stills that went for 20 yards. A few plays later Watson rewarded Stills for his effort by rewarding him with a touchdown. This was Watson’s third TD of the night, automatically making him the man of the match. The extra point was kicked good for another time, gifting the Texans with an even greater lead. This must have incensed the Pats offense, because they started driving once the ball was kicked to them. A few plays after  kickoff, Brady threw a big time pass to tight end Ben Watson that went for 23 yards. TB12 threw another chunk play to Julian Edelman that went for 44 yards. They continued on by scoring a touchdown (it was a Brady pass to one of his favorite targets James White). However, the PAT was kicked wide right, only giving New England 9 points instead of 10. Since the Patriots scored a touchdown, Houston knew they had to score another to keep a comeback form springing. Many plays after kickoff, Watson threw a 27 yard pass to DeAndre “Nuk” Hopkins; this brought the team to New England’s 14 yard line. Two plays later, they scored thanks to a trick play. Watson handed the ball off to Johnson, who then handed the ball off to Nuk. Nuk ran towards the touchdown line, but as he got hit lateraled the ball to Watson who dove for the six points. The extra point was not kicked wide unlike the Pats kicker, extending the lead for Houston 28-9.
4th Quarter (28-22)
New England led a mini comeback against the Texans in the fourth quarter, but it couldn’t translate to a win. The opened the fourth with a touchdown pass from Brady to James White again. Feeling the need for points, the Pats opted to go for two instead of a PAT. They failed to convert, easing the nerves of all Texans fans in attendance. Unfortunately, Houston could not score a field goal on their drive, resulting them in punting the ball back to New England. Tom Brady showed that was a mistake by passing to Jakobi Meyers for 21 yards. He then passed to James White for 36 yards. To culminate the drive, Brady passed to Julian Edelman for a 20 yard touchdown. They did not try to run another two-point conversion, sticking to a PAT that was kicked fair. Thankfully, Houston were able to stop the ensuing onside kick and get possession of the ball, ending the game at 28-22.
Highlights en Espanol

DEEP STEEL SUNDAY THOUGHTS
Deshaun Watson has passed Matt Stafford for the fourth most passing TDs in their first 35 career games in the Super Bowl era.

Darren Fells has passed both Owen Daniels and Joel Dreessen for the most receiving TDs by a tight end in a single season in Texans history.

After throwing his sixth pick of the season in the first quarter, Tom Brady became the oldest quarterback to record a tackle since 2000.

James White is now the eight running back in NFL history to have 300+ receptions in his first 75 career games.