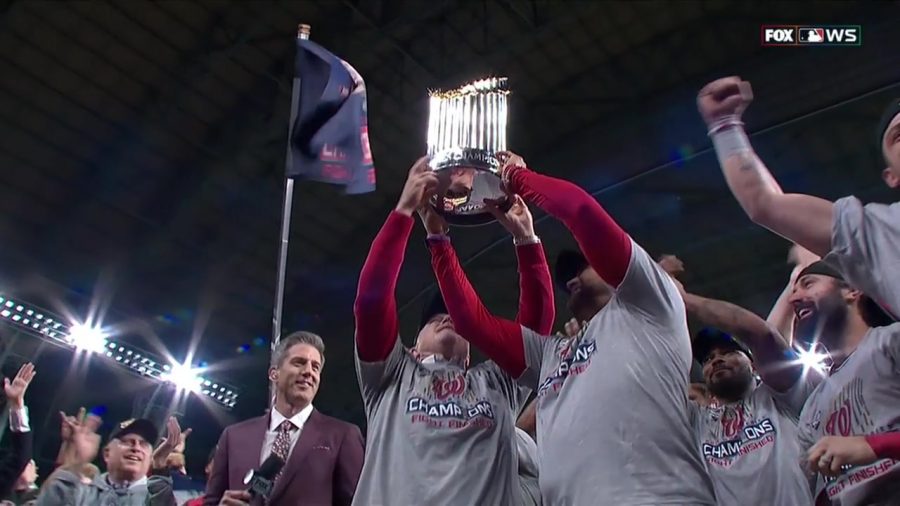 Happy Halloween to all who are still recovering from the Houston Astros losing the World Series. Our biggest fear came true. At least Anthony Rendon (a Houston native) got a ring, so all is not lost. Houston lost 2-6 in the worst possible way (bullpen implosion). Taking out Zach Greinke in the 7th will probably haunt AJ Hinch throughout the offseason. And what’s even more saddening is both the Astros and the Nationals share the same Spring Training facility in Florida. That has to hurt for the players and staff on Houston’s team.
Game Summary
The pitching match-up for Game 7 was between Greinke and Max Scherzer. Both pitchers excelled in the 1st inning, getting all the necessary outs to keep the opposing lineups hit less. Zach Greinke continued that excellence in the top of the 2nd. The elation of the Houston faithful came when Yuli Gurriel hit a towering home run to the Crawford Boxes in left field, marking the score 1-0. No scoring was done in any part of the 3rd inning keeping the 1 run lead.

The 4th inning showed both starting pitcher’s dominance on the bump. Again Greinke was dealing in the top of the 5th, giving the Astros lineup the chance to broaden the lead. And broaden the lead they did (even though it was by 1 run). Carlos Correa scored an RBI ground ball single that also moved a runner that was on 1st base (Yordan Alvarez)to 3rd base. Washington could do nothing to respond thanks in part to Greinke keeping the Nationals swinging and missing. Patrick Corbin was put in for Scherzer, in a move similar to Game 1, during the middleof the 6th inning. Corbin did successfully record the three outs to move onto the 7th.

This next part is gonna hurt (if you’re an Astros fan).

To start the 7th inning, Zach Greinke forced Adam Eaton to ground out. 1 out. Everything seemed normal, next batter up was Rendon; Greinke was having a good night he’ll strike him out. Rendon hits a rocket to Crwaford Street, drawing the score 2-1. Many people in attendance were displeased but confident Zach will do his thing and getthe other 2 outs. Than Greinke walks Juan Soto. Manager Hinch freaks out and substitutes him for Will Harris. Harris should have no problem right? Right?! Harris gives up a 2 run home run to Howie Kendricks (it hit the foul pole netting in right field, it looked to be a normal foul ball). Harris then gave up a single, effectively ending his night. The score was now 3-2. Roberto Osuna came in to stop the bleeding, but instead walked Ryan “Mr. National” Zimmerman. Thankfully, Osuna (not Ozuna; different person) got the next two batters to pop out and to fly out, ending the inning. As per the usual this series, the Astros hitters couldn’t do much after the lead change, scoring no runs.

Top of the 8th, Osuna forces Trea turner to groundout. Everything looks good, till he walks Eaton. Eaton then stole 2nd base. The stolen base freaked everyone at MMP out, but our fears were calmed down when Rendon flew out. Hinch talked to Osuna to calm his nerves going against Soto. Turned out it was for naught, because Soto hit an RBI line drive single that put the Nats up 2-4. Kendricks hit another single that ended Osuna’s night. Ryan Pressly came in, and got the last out. Again, Houston couldn’t find good contact with the baseball, keeping the score 2-4.

Last inning. Joe Smith is on the mound. All he needs are three outs for Houston’s turn to bat. The inning starts of poorly, surrendering a single to Mr. National Zimmerman. Smith did force out the next batter, securing out number one. 2 more outs now. But of course, Smith coughs up a single and then walks Trea Turner. We’re in a jam now folks. And because of that Joe Smith gets benched for Jose Urquidy. Urquidy completes the bullpen implosion by letting Adam Eaton hit a 2 RBI ground ball single. This ended Houston’s hope of a comeback. The score would remain 2-6 for the rest of the way. Patrick Corbin won the decision, with Will Harris losing the game. When the game was over, all the Nationals players, staff and their families celebrated on the field. Their win commenced with Manager Dave Martinez lifting the Commissioner’s Trophy in front of a few Nationals fans in front of the left field foul line. Stephen Strasburg was presented the 2019 World Series MVP Trophy along with a red Chevy Corvette Stingray. Below is his stat line for the series.

The rest of his stats can be found here: https://www.baseball-reference.com/players/s/strasst01.shtml?sr&utm_source=direct&utm_medium=Share&utm_campaign=ShareTool#pitching_postseason::none

Got to admit, the losers weren’t the Astros or the city of Houston. It’s the city of Montreal. The Nationals were originally the Montreal Expos from 1969-2004. They Expos were beloved by the city even though they never got close to winning a World Series. They are the real losers in this affair.