It was a full house at the Houston Community College West Loop Campus auditorium, as Dr. Anthony Harris recalled history on the Civil Rights Movement in the United States. 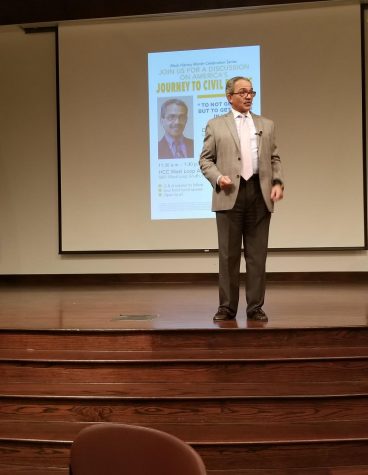 Part of HCC’s Black History Month Celebration Series, Dr. Harris spoke after a full audience of students, staff, and faculty. A soul food-style lunch was provided to all attendees.

Dr. Harris, who is an author, a Civil Rights activist, and a professor of Educational Leadership at Sam Houston State University, told his audience various encounters during the prime years of racism, segregation, and civil rights between white and colored people.

For him, things started to unravel when he graduated from high school in 1971.

One question was asked: was the Civil Rights over when Dr. King was shot? Dr. Harris says no.

“Believe it or not, we are still in a [Civil Rights] movement,” he said, “Are we done with racism? Are we done with White supremacy and bigotry? No. The struggle is still there.” 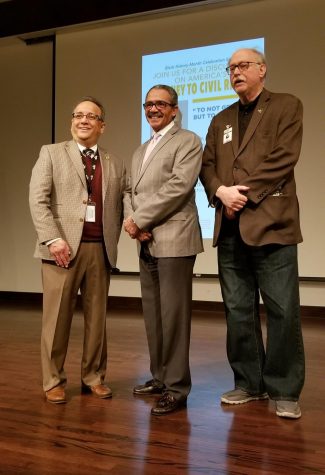 The answer was similar when another student asked “how far we came as a nation?”. He brought up former U.S. President Barack Obama and his presidency from 2008-2017, and how he was constantly discredited by the color of his skin, his education, and even his name. It was an example of bigotry, and as a nation, there’s still a lot of work to do to reach a point.

Dr. Harris’s visit gave some nostalgic vibes from both Southwest College President Dr. Madeline Burillo-Hopkins and Matias Garza, Dean of Student Success. Both of which were once classmates in the same cohort.

“It was great!” Dr. Burillo-Hopkins recalled, “he was a great professor during my time as a doctorate student. I encourage students pursuing a Doctorate degree to take his class, if all possible.”

You can find several of Dr. Harris’s books such as Ain’t Gonna Let Nobody Turn Me Around and Fruits of a Dying Legacy on Amazon.