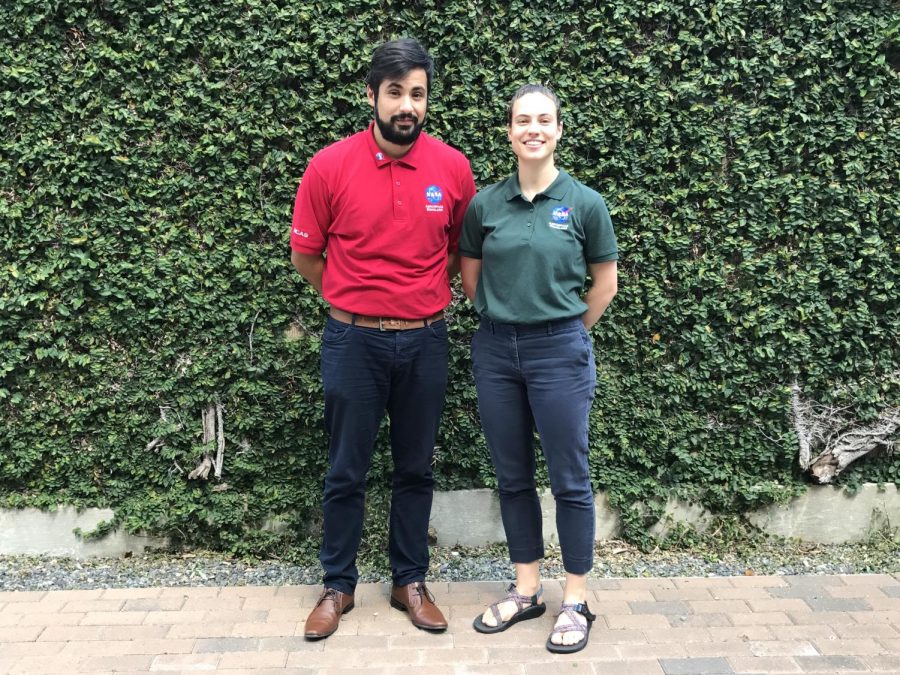 Stokman and Ponce heard about the opportunity through their HCC professors.

“My Mathematics professor Dr. Marion Alexander handed out flyers and asked me if I was interested,” says Stockman. “I had a professor who sent an email about the program.” Says Ponce.

Both Stockman and Ponce applied in the spring and were accepted over the Summer. They had to do a 5-week course during the summer which was an overview of NASA including NASA’s current research, history, and current projects. The course covered three different sections one of which was the ISS. “The thing I found most interesting was the ISS (International Space Station) because I was able to see all the research they were doing,” says Stockman.

The ISS is doing research about plant growth in microgravity. Students were able to see how plants grow, how they are planted and maintained. Microgravity causes plants to grown side-ways. 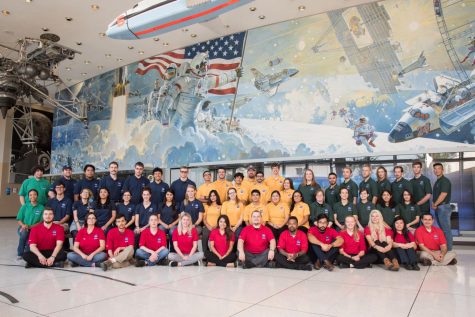 James Blair All the Different NASA teams in their colors.

After their 5-Week course at NASA students went back to do a Mock Rover competition. Their task was to build and program a rover in eight hours. Stockman and Ponce were on different teams. Sarah was on the GEAR team which stands for Green, Engineering, Autonomous, Robotics. Josh was on the alpha Red team. They had to create their own logo and a motto for each team as if they were their own company. Each team had a Lego Kit with a programmable computer and they had a budget of six Million dollars to work with to create their robots. “They we pretty complicated Legos,” says Josh about the Lego kits. Just like any company they had resource profits, project spending, budget increase, budget cuts, and fines they went through. “It was fake money but I was stressing out,” says Ponce. Students had to experience how NASA deals with money on their projects and research.

Stockman was her team’s Communications manager while Josh was his teams Project Manager. The CEO was their NASA Mentor and an employee at NASA. The Mentor or NASA Employee was able to give the students different tips on how to apply for different programs and how to build their resumes.

Students were asked to create a presentation to introduce their group members, their roles, design, budget information, company development and Marketing sponsorship.

“I felt like there was a lot of ME’s in my group, I am more independent so it was harder for us to contribute. We were trying to out alpha each other,” Ponce shared about his group experience. To Sockman’s experience working her team she says, “You have to develop trust with people you don’t know but they are also motivated to do things well.”

“We were told this is the competition, you guys have to go get rocks and scan minerals the first day so good luck with that.” NASA gave out no instructions so each team had to figure it out on their own. They had to make scoopers to get the rocks and minerals. Day 2 was about rescuing broken rover pieces which for students, were pieces of Legos. Most of these projects are for the students to develop relationships with other community college students. “This is a great opportunity for anybody, it was a really good team building exercise,” says Ponce. “There was a lot of non-traditional students there.” Stockman shared about the cultural aspect she experienced.

The application process included and explanation of why students wanted to be a part of the experience, a letter of recommendation and an unofficial copy of the student’s transcript.

As to Stockman’s experience she says, “I don’t want to be an engineer but the thing that was interesting was computer science because the people there who were majoring in computer science and talking to them and seeing what they were doing. It’s an important concrete skill that can be applied in almost any industry.”

“This is a great opportunity for anybody, it was a really good team building exercise,” Ponce shared with me.

Stockman and Ponce were on different teams and didn’t know there were other HCC students until their last day at NASA. Ponce says, “They were trying to take pictures of everybody from the same school, so there was this table with a bunch of signs and there was only one HCC sign so I grab it not knowing Sarah had already claimed it and she came back saying someone took my sign and that’s how we met.

Ponce’s next step is to do the Micro G-Next Program.  The program is more independent than the 4 days they did with NASA. The Micro G-Next program has real world problems, create a models and hardware to create and solve. Each group has to make a proposal and a model of their project. If selected the winner will bring their prototype to NASA and test it in the Neutral Buoyancy Pool. Ponce has already turned in his proposal and in the process of trying to find ways to fund his project in order to proceed with the program.