Zach Braff is ‘Going in Style’, arrives in mainstream 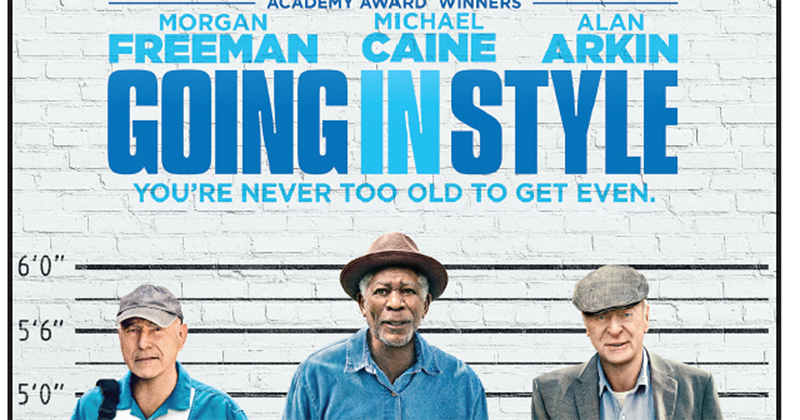 Indie director Zach Braff, better known as the daydreaming doctor J. D. from “Scrubs,” delivers his third feature film without an ounce of indie in the frame. Although the family-friendly feel-good comedy is highly entertaining and hits theaters in time for Easter, it also misses the edginess seen in his previous works, “Garden State” and “Wish You Were Here.”
Three seniors, Joe (Michael Caine), Willie (Morgan Freeman) and Albert (Alan Arkin), are best friends – the benefit of being colleagues for decades. Now, they are enjoying their retirement, but financial struggles prevent it from being as fun as they had hoped. Willie and Albert are sharing an apartment to save money; Joe took in his daughter and granddaughter to provide for them. One day, the retirement checks stop coming in, and at the bank Joe learns that he has lost all his savings after he was talked into a risky speculation. Just then, the bank gets robbed. Afterward, when the bank threatens to foreclose on his house, Joe becomes increasingly desperate and starts to believe that a robbery would solve their financial problems. After talking his friends into it, the trio realizes that robbing a bank is quite an ambitious endeavor for three elderly men. Can they pull off the heist?
This film fits the mold of a feel-good movie; nothing is offensive, no one gets seriously hurt and the “bad guy” is a faceless institution (except for the overdrawn bank teller). That alone is not a bad thing, but it isn’t particularly exciting either. What help viewers forget the simplicity of the plot are the cast and Braff’s fast-paced direction. The geezer trio delivers wonderful witty dialogue, especially Arkin who shines as a sarcastic big-mouth. The supporting cast features Matt Dillon as the FBI agent investigating the bank robberies, Joey King as Joe’s granddaughter, Ann-Margret as Albert’s love-interest and Christopher Lloyd as Milton, the trio’s senile and scene-stealing friend, who can hear as well as ‘Mr. Magoo’ can see.
‘Going in Style’ highlights an important topic that Hollywood usually ignores: the value of elderly. Poverty among old people was never as bad as it is now; nursing homes are overcrowded and often people have to keep working post-retirement to provide for themselves and their loved ones. The message is clear: We need to make sure that old people aren’t left behind, and many of them are more talented and motivated then one would think.
The film is actually a remake of the 1979 film of the same title starring George Burns, Art Carney and Lee Strasberg. Screenwriter Theodore Melfi, who was just Oscar-nominated for his “Hidden Figures” script, kept the structure of the original film but erased everything edgy – like the trio’s endeavor in Las Vegas or that Joe comes up with the idea of the heist on his own – without getting inspired by another robbery in the first place. It’s very contrived, but still funny. Zach Braff’s direction suggests that he is a specialist when it comes to comedy. ‘Going in Style’ sports dark undertones and quirkiness, as with Braff’s earlier films, but it marks his transition from an indie to a mainstream director.
It will be interesting to see if he will continue on that path.