In Retrospect: The Age of Movies by Pauline Kael 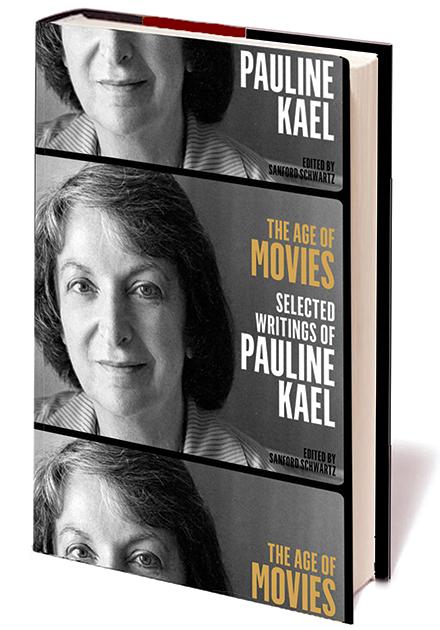 Everything has to come from somewhere.  Nothing is created in a vacuum.  Modern film criticism owes its current shape to the molding of many hands.  Some of them, like Roger Ebert, are household names, while others remain in obscurity.

It’s hard to know what kind of reputation Pauline Kael has in today’s fandom oriented pop culture.  It is possible that most of today’s readers will have no clue that she even existed.  If so, it will be one of the great ironies that modern film culture forgot the woman who made its current shape.  For these reasons, the Library of America’s publication of Kael’s selected writings in The Age of Movies, might come as a bit of a shock.  If anything, this collection of Kael’s reviews and essays will reveal that today’s impressionist, individualistic discourse is nothing new.

In his introduction to the collection, editor Sanford Schwartz writes that Pauline Kael was “lucky” in her timing.

“Her tenure as a regularly reviewing critic coincided with the modern flowering of movies, the period, primarily from the 1960s (for foreign films) and the 1970s (for American films), when moviemakers were working more than ever with the autonomy associated with poets, novelists, and painters.  While hardly always laudatory (and to some readers plain wrongheaded), she nonetheless…gave a breathing, textured life to the aims and sensibilities of Ingmar Bergman, Jean-Luc Goddard, Federico Fellini, Satyajit Ray, Akira Kurosawa, Francois Truffaut, among other European and Asian directors; and she endowed Robert Altman, Martin Scorsese, Paul Mazursky, Brian De Palma, and Francis Ford Coppola, among American directors of the following decade, with the same full-bodied presence (Kael xii)”.

In addition Kael was one of the few critics willing to find a value in films others might deem to be “trash”.  This idea of finding value even B-grade films is admirable in itself.  Films like Richard Matheson’s The Last Man on Earth (1964) do have a literate nature for those willing to appreciate it.  The problem is that it sometimes requires a certain amount of humility and imaginative sympathy in order to gain the proper enjoyment of such works.  In her 1969 essay Trash, Art, and the Movies, Kael tries to talk the talk, yet can’t quite manage the walk.

The opening paragraph of the same essay spells out the first of two major flaws in Kael’s aesthetic:

“Like those cynical heroes who were idealists before they discovered that the world was more rotten than they had been led to expect, we’re just about all of us displaced persons, “a long way from home.” When we feel defeated, when we imagine we could now perhaps settle for home and what it represents, that home no longer exists. But there are movie houses. In whatever city we find ourselves we can duck into a theatre and see on the screen our familiars—our old “ideals” aging as we are and no longer looking so ideal. Where could we better stoke the fires of our masochism than at rotten movies in gaudy seedy picture palaces in cities that run together, movies and anonymity a common denominator? Movies—a tawdry corrupt art for a tawdry corrupt world—fit the way we feel. The world doesn’t work the way the schoolbooks said it did and we are different from what our parents and teachers expected us to be. Movies are our cheap and easy expression, the sullen art of displaced persons. Because we feel low we sink in the boredom, relax in the irresponsibility, and maybe grin for a minute when the gunman lines up three men and kills them with a single bullet, which is no more “real” to us than the nursery-school story of the brave little tailor (201).”

The opening sentence for her review of West Side Story lays out her second major problem when she claims that: “Sex is the great leveler, taste the great divider (51)”.  If that statement seems out of place then the sentiment is understandable.  This is not to say that “Romance” (to use a more polite term) doesn’t have its place in cinema.  It has existed in fiction long before the screen came along, and will always be a part of the artist’s repertoire.  The problem is Kael’s insistence on a dis-enchanted romanticism combined with a latter day Freudian outlook.  With her conflation of a “knowing” cynicism and a shallow definition and understanding of Romance, Kael has created a very self-contradictory approach to reviewing art.  This is the critic as Freudian Id.

Aside from the fact that even modern psychology has disowned the ideas of Freud, Kael’s greatest fault lies in her rejection of Romanticism.  In her review of Akira Kurosawa’s samurai classic Yojimbo she makes no effort to hide her principles.

“Of all art forms, movies are most in need of having their concepts of heroism undermined.  The greatest action pictures have often been satirical; even before Douglas Fairbanks Sr. mocked the American dreams, our two-reelers used the new techniques of the screen to parody the vacuous heroics of stage melodrama.  George Stevens Gunga Din, a model of the action genre, was so exuberant that it both exalted and mocked a schoolboy’s version of heroism.  But in recent years John Ford, particularly, has turned the Western into an almost static pictorial genre, a devitalized, dehydrated form which is “enriched” with pastoral beauty and evocative nostalgia for a simple, heroic way of life (78)”.

Kael remains adamant in her condemnation, maintaining that the “clichés we retained from childhood pirate, buccaneer, gangster, and Western movies have been awarded the status of myths, and writers and directors have been making infatuated tributes to the myths of our old movies.  If, by now, we dread going to see a “great” Western, it’s because “great” has come to mean slow and pictorially composed.  We’ll be lulled to sleep in the “affectionate,” “pure,” “authentic” scenery of the West (in “epics” like My Darling Clementine, She Wore a Yellow Ribbon, Fort Apache) (ibid)”.

Kael’s thinking is off by several factors.  One mistake is her disdain for heroism in relation to fiction.  What she fails to understand is that, in a very literal sense, people of all civilizations live or die by their ideals.  Thanks to the work of scholars like Joseph Campbell or C.G. Jung, it is acknowledged that it’s not enough for anyone to have ideals.  These ideals must find some proper form of imaginative expression in order to form any kind of coherent culture.

In addition, it’s a mistake to call a work like Fort Apache, with its examination of troubled race relations between frontier settlers and Native Americans, anything but simple or nostalgic.  Ford’s whole purpose in that film is to accomplish the very goals Kael deems necessary by questioning the nostalgia and sentiment of the past (in this case through a fictional retelling of the Battle of Little Big Horn).  It’s an idea Ford revisits often in his best work.  It is ironic, then, that Kael would censure Ford while singing the praises of Kurosawa, a director who claimed Ford as his inspiration, and who’s Yojimbo echoes the latter’s ambivalence toward traditional narratives about one’s own culture.

This is the contradiction that Ms. Kael returns to more than once.  For instance, she will heap laurels on Shakespeare in one review, and then slight the work of J.R.R. Tolkien in another.  She fails to make connections where they’re needed, and neglects the value of popular art while having good things to say about Brian De Palma’s Carrie.

What the readers is left with is vision of a critic who lacked vision.  This is a problem because Kael seems to have influenced current day internet reviewers with her impressionist, uncomprehending, shoot from the hip style of critique.  The result has made for several generations of shallow thoughts about film that barely scratches the surface of even the simplest motion pictures.  For instance, it is one thing to say you admire Disney’s 101 Dalmatians.  What about the fact that it almost shares similarities to both Gregory Peck’s and Martin Scorsese’s Cape Fear?  Or the fact that the film successfully utilizes a plethora gothic tropes, thus making it valid to examine in light both English and American gothic fiction?  This is part of what it means to treat even children’s films as serious art.  It is a depth of perception that is sadly lacking in the work of Pauline Kael.

In the end, perhaps Kael’s legacy is summed up by the one person who knew her best.  At a memorial tribute, Gina Kael summed up both her mother as both a person and a critic:

“Pauline’s greatest weakness, her failure as a person, became her great strength, her liberation as a writer and critic. She truly believed that what she did was for everyone else’s good, and that because she meant well, she had no negative effects. She refused any consideration of that possibility and she denied any motivations or personal needs . . . This lack of introspection, self-awareness, restraint, or hesitation gave Pauline supreme freedom to speak up, to speak her mind, to find her honest voice. She turned her lack of self-awareness into a triumph (web).”