‘The Accountant’ is one you can count on 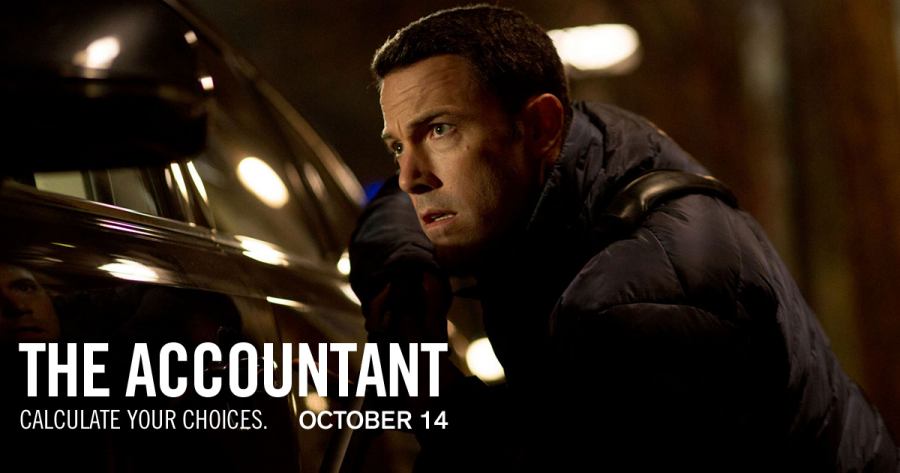 Accounting is said to be boring, unless you have a weird affiliation with numbers. When someone considers watching a movie called ‘The Accountant’, they might not expect any excitement from it, but come to find out it’s much more than its face value.

Christian Wolff (Ben Affleck) seems to be a normal small-town accountant. As a child he was diagnosed with Asperger-syndrome, a form of autism. He has an incredible memory and an even bigger talent for numbers. He is a genius trapped in his own body, just like Dustin Hoffman’s character Raymond from the movie ‘Rain Man’. However, his father, a highly ranked military man, refuses to let him live in a specialized nursing home and decides to physically train on his own, so little Christian can face the ugly world that is waiting for him and prepare himself.

Now as an adult, his illness declined into an obsessive-compulsive life style, where he carefully places his breakfast on a plate and times the garage opening with his exact arrival. He doesn’t engage in small talk and is also very direct with people, which often results in awkwardly short conversations with his peers. He want’s to connect with other people, but unfortunately he doesn’t overcome his inner barriers. But Christian Wolff has a second life: He uses his incredible talent to uncook the books of terrorists, dictators, drug lords and other criminals, and does this so well and effectively, that he survives to be able to continue to work for such shady clientele.

Despite his alias as a small-town accountant, the high-ranked treasury agent Raymond King (J. K. Simmons) is suspicious about Wolff and he recruits the young analyst Marybeth Medina (Cynthia Addai-Robinson) to look into him. At the time Wolff decides to take a ‘normal’ job, and instead of working for criminals, he looks into the books of a successful robotics company, run by Lamar Black (John Lithgow). When Wolff and the in-house accountant Dana Cummings (Anna Kendrick) find some anomalies in the files, they are suddenly hunted by a mysterious killer (Jon Bernthal) and the body count starts to rise.

When you watch the trailer for “The Accountant’ you might expect a straight action film, something like the Bourne movies. However, this movie is a smart thriller with dramatic elements. The movie keeps the viewer in the dark for a while and does not reveal what the Character is thinking. Affleck does an amazing job playing an autistic man with almost no emotions and every gesture seems unwillingly controlled, yet he is able to take out a complete team of well-trained Special Forces, thanks to his father’s training, and he is an excellent shooter. He pairs up with Anna Kendrick. Without being a simple comic-relief, she eases up the suspense at times and does what she does best: playing an average person that has a few quirks. In the supporting roles Jon Bernthal stands out the most, but he also has the most screen time.

The director Gavin O’Connor (Warriors, Jane got a Gun) once again proves that he has an excellent sense for good scripts and he keeps control over the entire movie. He does a great job motivating the actors and push them to deliver great performances. Switching from the sensitive portrait of an outsider to ultra-violent gunfights comes easy and never feels constructed. O’Conner, just like his main character, doesn’t make any compromises and therefore this movie is R-rated for strong violence and language. He also follows the old rule of “show, don’t tell”. When Wolff’s life gets out of order, he almost runs into the opening garage door, which he formerly passed in perfect timing without slowing down. This gives the audience a look into his unraveling mental state.

The story, written by Bill Dubuque, is grounded and realistic, and unfolds anachronisticly, as it reveals Wolff’s former life and his childhood through flashbacks. The script was on the 2011 Blacklist, a list of most liked, yet unmade scripts. It is also notable that autism is portrayed in this movie in a very sensitive and realistic way; they even hired people with Asperger syndrome to participate in this film.

The Accountant is a suspenseful and well-written movie with a great cast and definitely one of the most entertaining movies of the year so far. It’s the perfect mix of character drama, detective movie and action thriller, and all actors give great performances. I had a high expectation for this movie, and luckily, ‘The Accountant’ stood up to that.