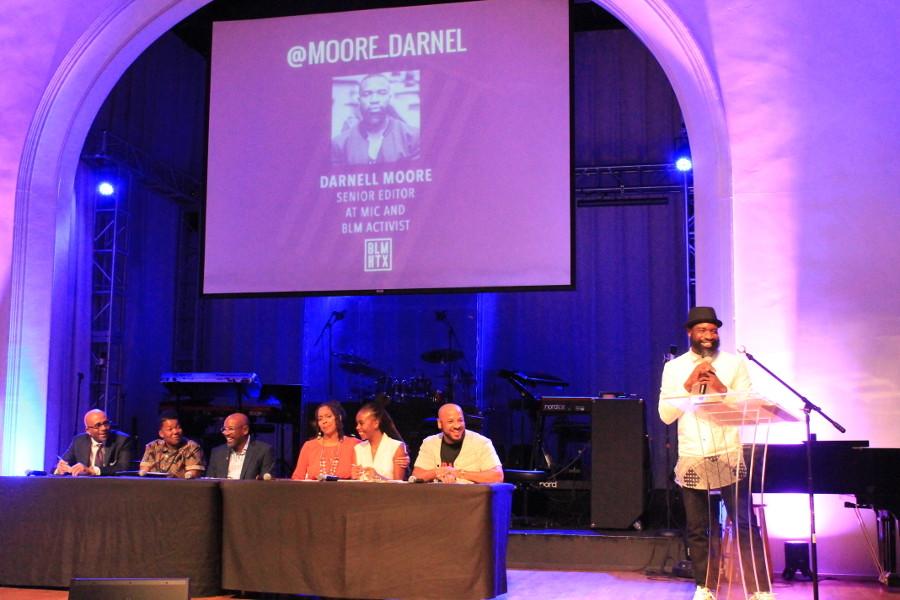 The Black Lives Matter movement hosted their first sizable meeting in Houston on Friday Sept. 18. The event was held at St. Johns Methodist Church, which housed close to 500 locals.

The panel discussed the BLM movement, as well as key issues.

The BLM movement fights for social structure to prevent any social injustices towards the black community. It’s not just a movement for specific issues. The movement does not fight for just black male lives, but also black women’s lives, black trans lives and black queer lives.

There were seven panelists: Darnell Moore, senior editor at MicNews and co-manager and editor at The Feminist Wire; Dr. Anthony B. Pinn, professor of humanities and religious studies at Rice University; X’ene Sky, a pianist, composer, teacher and activist; and Robert Hodge and Lovie Olivia, both interdisciplinary artists. Pastors Rudy and Juanita Rasmus of St. Johns Methodist Church also were a part of the panel.

Sky also stated that the BLM movement, “has taken a little bit of a darker turn for me because we are still at the place where we are trying to prove and firm that our lives matter, and I’m anxious to get passed that place, passed the place where I don’t have to keep saying that my life matters. That [it] is already understood.”

Pinn added that the movement, “It’s a hope.”

“There is an Ordinance on the table right now — the Houston Equal Rights Ordinance. And the division has been sort of strange. We have one group of folk convincing the Houston populace that this is about only restrooms and who can use certain restrooms. But it’s really about equal rights for people,” Says Rudy Rasmus. “Fear is one thing that the opposition uses effectively. And that is where we are today in Houston, mediating and managing fear.”

In the response to the All Lives Matter counter-protests, Penn states, “It seems to me that All Lives Matter is a statement of support for the status quo… and it removes the ability to give right of those who are experiencing pain to speak out against their pain.”

“On a theoretical level, yes in the U.S. all lives have mattered. But this is the problem; what has been meant by that is white lives. That so-called, ‘people of color’ and women had to be written into that statement,” explained Penn.

It is interesting to find that many years after the Harlem Renaissance, art is still being created with the same passion.

“I think back to being a kid and I think we all have went to museums and seeing all this European work. That means something. It means something when I didn’t see myself. . . as I got into high school, you started realizing your voice and seeing yourself and why it’s important. When I started getting a little older I started having a couple of art mentors of people I admired and they were doing things and presenting color the way that made me feel proud. And I kind of wanted to carry that torch,” Hodge said.

Penn concluded, “I yearn for a time when difference isn’t a problem to solve but it’s an opportunity, for a space where critical thinking and radical ideas are as plentiful as the air. And I think at the end of the day it really simply amounts to having space and resource to live out the wisdom of our ancestors. Like my grandmother, who sent me off to college with this: ‘Move through the world knowing your footsteps matter’.”