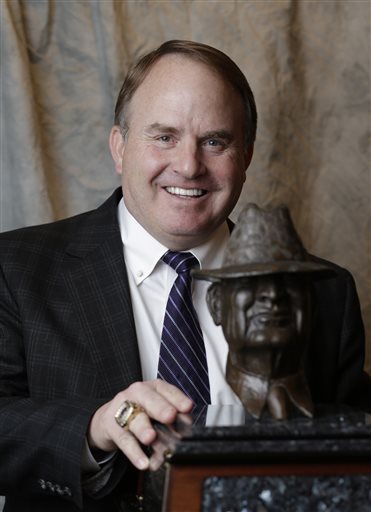 HOUSTON — TCU coach Gary Patterson was rewarded for helping the Horned Frogs to an impressive turnaround this season by winning the Paul “Bear” Bryant College Coach of the Year on Wednesday night.

Patterson led the Horned Frogs to a 12-1 record a year after they went 4-8.

“How can you not be honored by being mentioned in the same (sentence) as Bear Bryant,” Patterson said.

Some were unhappy that the Horned Frogs were left out of the first College Football Playoff, but Patterson said he chose not to give into the negativity.

Instead, TCU wrapped up its season with a 42-3 win over Mississippi in the Peach Bowl.

Patterson beat out Mississippi’s Hugh Freeze and Boise State’s Bryan Harsin for the honor. Alabama’s Nick Saban and Florida State coach Jimbo Fisher were originally finalists for the award, but were disqualified because they could not attend Wednesday’s event.

Harsin led Boise State to a 12-2 record, capped by a win over Arizona in the Fiesta Bowl, in his first season after taking over for Chris Petersen. He credited his players for his success this season.

“This year being the first-year transitioning and all that, it’s buying in and guys doing all the little things and sacrificing and that really showed up throughout this entire year,” Harsin said.

Freeze, who took over at Mississippi in 2012, led the team to a 9-4 record this season after a 7-0 start. The Rebels have finished with a winning record in each of his three seasons after going 2-10 the year before he arrived.

“In my heart I’m just a high school coach who got a break and has been fortunate in three short years to take a team to relevancy,” he said. “So it’s certainly an honor to be here.”

Jimmy Johnson, who won a national title at Miami and back-to-back Super Bowls with the Cowboys was given the Bryant Lifetime Achievement Award.

“Every coach wants to be identified with some of the best that’s been in the business so it’s an honor,” Johnson said.

Johnson grew up in Port Arthur about 90 miles from Houston. He said he doesn’t have any family remaining in his hometown but that he has a sister in the Houston area and was glad to have another reason to come and visit her.

The awards were given in conjunction with the American Heart Association.