Josh Gad on ‘The Wedding Ringer’ and his career 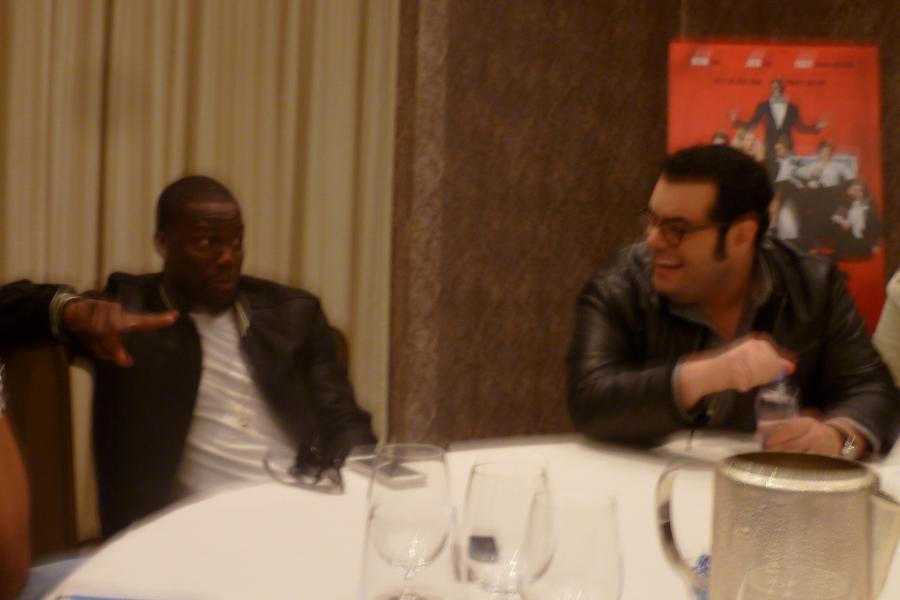 The Wedding Ringer is a bromantic comedy from Sony Pictures which is coming to theaters Jan. 16, 2015. Josh Gad plays the friendless groom-to-be Doug Harris, who hires professional best man Jimmy Callahan (Kevin Hart) to be his right-hand man at the wedding. Three members of The Egalitarian staff took part in a round table interview Dec. 12 where co-stars Kevin Hart and Josh Gad discussed the new movie and their careers. We have covered Kevin Hart’s interview here, but Josh Gad had a lot to say as well.

Q: “Can you talk about your transition from Broadway to the big screen and how that all occurred?”

A: Josh Gad: “Yeah. My first big break was on Broadway in a show called ‘Spelling Bee’, and then afterward I did a little show called ‘Book of Mormon’. And that sort of catapulted my career in the most unexpected and wonderful way imaginable. I’d been doing a lot of film and television during the course of that time, but the ‘Book of Mormon’ gave me more opportunities than I had ever imagined. And so, rather than chasing a lot of things, different opportunities [were] being presented to me. One of them was this amazing script called, at the time, ‘The Golden Tux’ which had been sitting around for a while. Kevin [Hart] had attached himself to it, and they were looking for a co-star, and I guess Jack Black and everybody else turned it down, so I took that opportunity … I said, “I want to do it!” And Kevin said, “If we can’t get anybody, then I will gladly settle for Josh.”

Hart jokingly asked, “So you’re saying everybody else was unavailable?”

“Josh Gad’s the guy. He’s the guy. No. He’s joking,” Hart explained. “Josh Gad was definitely at the top of our list. We met, we had it all, the chemistry was instant. I told the studio, “He’s the guy.” The studio pushed a button, green-lite it, and we went to production. And we hit the ground running.”

A: Josh Gad: “It’s about looking for those opportunities to show different colors. I didn’t want to follow [playing Olaf in] Frozen with, sort of, you know, another family comedy. And so I chose a movie where a dog takes advantage of my privates instead. Ya, you’re always sort of lookin’ to change it up. Whether, for me it’s doing Broadway, or television, or a live-action film, or playing a snowman. I’m always looking for that next thing that’ll challenge me, that’ll be interesting and that’ll be unexpected for an audience.

Q: “What has doing live shows taught you that has made you excel when you make films?”

A: Josh Gad: “You can’t fake it on stage. Whether you’re doing stand up, or you’re doing a Broadway show, the audience will see right through you and they will eat you alive. And that is the best training ground you can get. Because if you can do that, if you can give it your all in front of a live audience and they go along for the ride, then you’re pretty much set up for anything.”

Q: “How was it working with the rest of the cast? You all kind of gelled together.”

A: Josh Gad: “The entire cast from top to bottom was exceptionally gifted. Each one of them. I call it the male equivalent of ‘Bridesmaids’ because in the same sense that when that movie came out, everyone of those people who you had never seen before, including Melissa McCarthy, all exploded from that movie by taking these small little characters and making them so unique and distinct. The ensemble of ‘[The] Wedding Ringer’ does that and then some. Each guy brought a level to that character that was never defined on the page… Whether it’s a simple eye twitch or a wheelchair roll—just the way he does that is so funny. It’s all so weird, and all of that was defined by these guys who came from a world of comedy and who were fearless and who followed – I think we all followed – Kevin [Hart]’s lead in that sense, and just being free to just go along and to just have fun and throw ideas out there. You couldn’t fall on your face. Everything we did was OK. If it was too much, we would do it again and we would bring it down, but that’s how you found this film is we all discovered it on the day [of filming].”

About the movie, Josh Gad also said, “I think it’s all grounded in reality which is what, for me, watching this movie now with a couple of different audiences makes it stand apart. You see the audience going along for the emotional ride, as well as, you know, laughing in all the right places. They’re invested. They’re invested in these two guys. They’re invested in this journey and that to me is a very unique proposition when you have a film like this. Usually you get one or the other. You get the heart or you get the crazy comedy. It’s rare that a director is able to achieve both. And I think Jeremy Garelick, who directed it, did that seamlessly.”